Atlanta, GA – The Atlanta Journal-Constitution reports that Liberal Insider Jon Ossoff earned the endorsement of Ted Terry, one of the most radical far-left politicians in the state of Georgia

Terry was a competitor of Ossoff’s in the Democrat Senate primary until a few months ago when his campaign collapsed due to weak fundraising. Terry has been known for openly meeting with foreign democratic socialist organizations and endorsing socialist political causes and candidates in Georgia.

This isn’t the first time that a member of the extreme left has openly supported Ossoff. When he ran for Congress in 2017, Ossoff was endorsed by Vermont socialist Bernie Sanders and – even more alarmingly – backed by Communist Party USA: 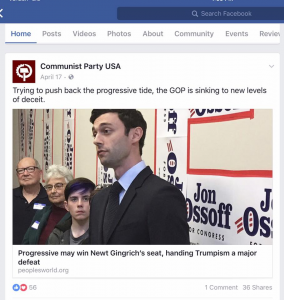 “Ted Terry is the latest radical socialist to join a long list of radical liberals who’ve supported Jon Ossoff,” said Georgia GOP Executive Director Stewart Bragg. “Georgians do not want a Senator who welcomes the endorsement of far-left extremists whose policies would destroy our country.