And who’s most excited about privileged liberal Jon Ossoff being the nominee? Liberal elites in California and New York – the same radical activists and Hollywood celebrities who funded Ossoff’s $30 million failed congressional run in 2017. Here are some of Ossoff’s top radical liberal allies.

BERNIE SANDERS: The socialist politician and former presidential candidate backed Ossoff in 2017, saying it was “imperative” that the unaccomplished liberal documentary filmmaker be elected. Ossoff and Sanders are so aligned that Vice News said Ossoff’s Senate campaign is “cribbed straight from the playbook of Vermont Sen. Bernie Sanders.”

TED TERRY: Georgia socialist Ted Terry is one of Ossoff’s top endorsers. Terry proudly supports defunding the police, but Ossoff continues to refuse to say whether he agrees with Terry.

COMMUNIST PARTY USA: The official communist party in the U.S. posted a ringing endorsement of liberal Jon Ossoff on their Facebook page in 2017: 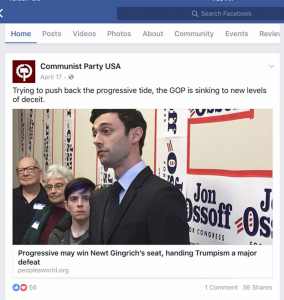 RADICAL HOLLYWOOD ELITES: During his failed congressional run and throughout his Democrat Senate primary, Ossoff has relied on radical Hollywood liberals to fund his campaigns. Celebrities like Alyssa Milano and Debra Messing have openly backed Ossoff. Sadly for Ossoff, Milano didn’t return his desperate calls after he announced his Senate candidacy on MSNBC live from New York City, according to The New York Times.

With a track record like this, Jon Ossoff can’t be trusted to put Georgia families and communities ahead of these Washington elites, radical socialists, and Hollywood liberals who are funding his bid for U.S. Senate.

Watch Nancy Pelosi say that she is “proud” of Jon Ossoff.