In case you missed it, just days after Stacey Abrams qualified to run for governor, a super PAC funded by George Soros reportedly put $1 million into her campaign.

Soros has been known to fund far-left causes, including the defund the police movement and BLM. He has donated so much money to the Drug Policy Alliance, which advocates for decriminalizing all drugs, that he is known as the “sugar daddy of the legalization movement.”

Worst of all, between 2016 and 2020, Soros poured over $25 million into several radical abortion groups, some of which focus on “increasing access to government-funded abortions. 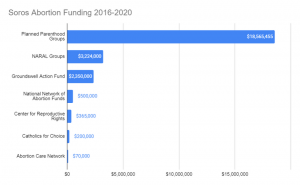 “George Soros’ $1 million donation to Stacey Abrams should come as no surprise – both Soros and Abrams are far-left radicals who do not represent Georgians on any level.” – Georgia Republican Party Press Secretary Dani Repass