Georgia Democrats should win an award for being out of touch

Georgia Democrats should win an award for being out of touch.

Raphael Warnock tweeted his support for the Biden administration’s proposal to eliminate student debt, which would be detrimental to our country’s already precarious financial situation. 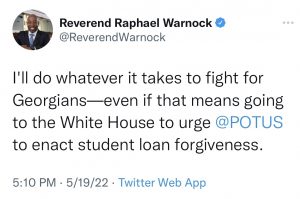 The Urban Institute found that “most outstanding student loan debt is held by people with relatively high incomes…it is disproportionately concentrated among the well off.”

The average individual among top-earners would receive $5,944 due to student debt forgiveness, while those with the lowest incomes would receive just $1,070; an almost $5,000 difference.

The Federal Reserve estimated that forgiveness of $10,000 per borrower would cost taxpayers an estimated $321 billion.

Currently, Atlanta has the second-highest inflation rate of any city in the country other than metro Phoenix, Arizona.

“Democrats’ proposal to eliminate student loan debt is untenable to anyone who has been paying attention to our country’s current economic crisis. Raphael Warnock and Stacey Abrams are out of touch with everyday Georgians, a fact that will be made clear in November.” – Georgia Republican Party Press Secretary Dani Repass